A Conversation with Dan Immergluck - #aboutATL 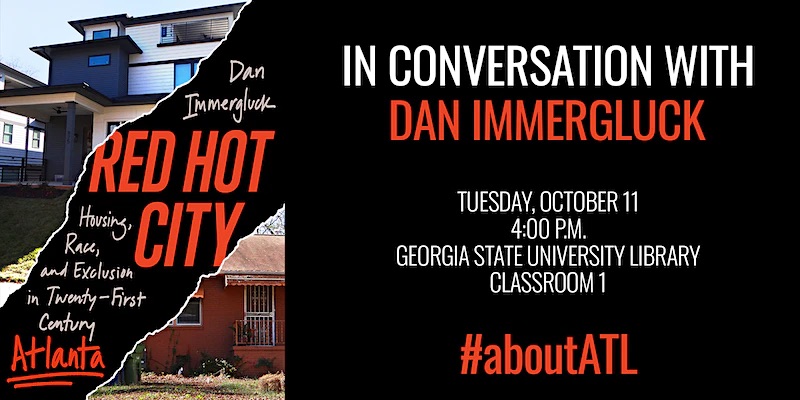 An incisive examination of how growth-at-all-costs planning and policy have exacerbated inequality and racial division in Atlanta.

Atlanta, the capital of the American South, is at the red-hot core of expansion, inequality, and political relevance. In recent decades, central Atlanta has experienced heavily racialized gentrification while the suburbs have become more diverse, with many affluent suburbs trying to push back against this diversity. Exploring the city’s past and future, Red Hot City tracks these racial and economic shifts and the politics and policies that produced them.

Dan Immergluck documents the trends that are inverting Atlanta’s late-twentieth-century “poor-in-the-core” urban model. New emphasis on capital-driven growth has excluded low-income people and families of color from the city’s center, pushing them to distant suburbs far from mass transit, large public hospitals, and other essential services. Revealing critical lessons for leaders, activists, and residents in cities around the world, Immergluck considers how planners and policymakers can reverse recent trends to create more socially equitable cities.

"In Red Hot City, Dan Immergluck shows us how the sausage is made—or rather, how a city is. This autopsy of Atlanta is many things at once: a study in urban inequality, an examination of how corporate and political elites shape our neighborhoods, a detailed blueprint of how cities become unaffordable, and an elegy for what could have been. This is an essential book for anyone who loves cities and seeks to make them more just and inclusive."—Matt Desmond, author of Evicted: Poverty and Profit in the American City

"Dan Immergluck, a leading scholar of housing inequality in the United States, is a crucial interlocutor for understanding the new, emergent trends in housing exclusion driven by gentrification, displacement, suburbanization, and changing economies. Immergluck shifts this familiar story from the nation’s largest cities to one of the hottest housing markets in the country. Using metropolitan Atlanta as a canvas, Red Hot City paints a jarring picture of deepening housing precarity and crisis—even amidst an ongoing economic boom. Rigorous, analytical, and urgent, Immergluck’s mapping of the meaning of systemic housing inequality provides the insights and intellect to fix the problems about which he so adroitly writes. If you want to understand the housing crisis that is gripping America, this is the book you must read."—Keeanga-Yamahtta Taylor, author of Race for Profit: How Banks and the Real Estate Industry Undermined Black Homeownership

The Georgia State University Library houses more than 1.9 million physical volumes, 700,000 ebook titles, 230,000 serial titles and 280 online databases. The libraries on each of the six campuses provide access to the expertise of librarians and staff dedicated to student success. Special Collections and Archives documents the history of the university, Atlanta and life in the South, with particular strengths in social change movements during the late 20th and early 21st centuries. The 300,000 sq. ft. Atlanta Campus location offers seating for more than 2,000, 55 group study rooms, an outdoor terrace, and access to leading-edge computing and visualization technology.

The University Library is proud to present this event as part of the #aboutATL event series, focusing on the growth and historical importance of the city of Atlanta on all facets of culture from music to infrastructure to the economy.